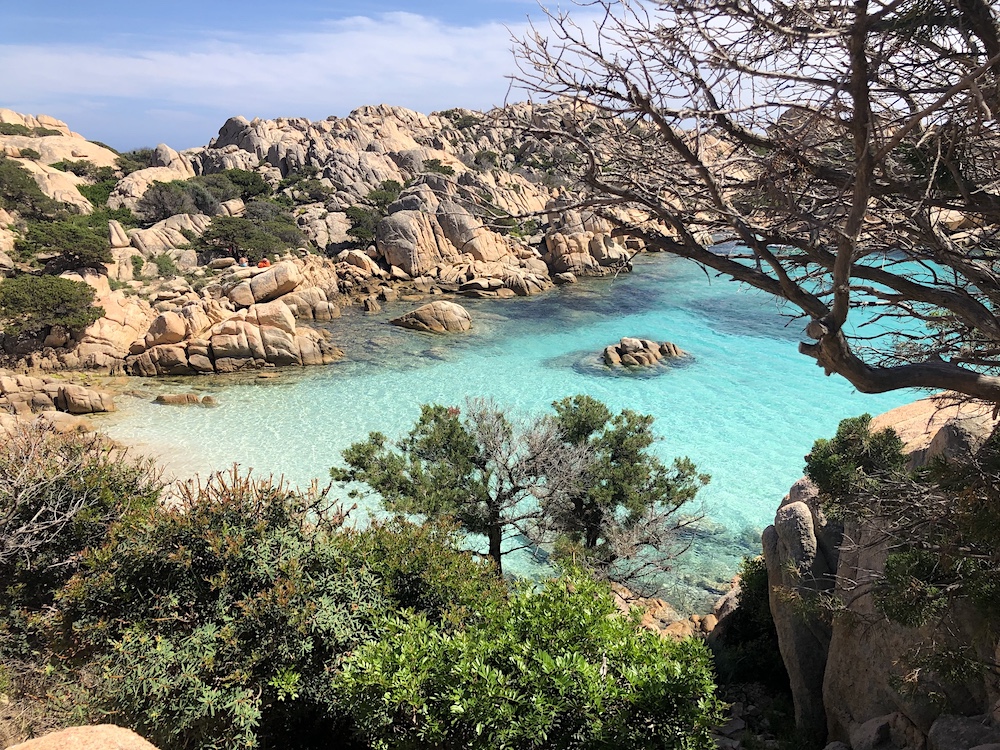 Caprera can be reached from the Gabbiano Azzurro Hotel & Suites in an hour and a half by car and ferry. The jagged coast of the island divides Caprera into two sides. The eastern one is steep and covered with Mediterranean scrub, and is difficult to visit. Due to this uncontaminated side, in 1982 the island was declared a Natural Reserve and inserted in the National Park. Through a path or from the sea you can visit Cala Coticcio, one of the most beautiful coves of the National Park, surrounded by the green of the Mediterranean scrub with thin white sand beach pink rocks and crystal clear sea ideal for snorkelling for the multitude of fish and starfish. The eastern side also houses Cala Portese, Punta Rosa and the beach named after the remains of an ancient ship on the shore, Spiaggia del Relitto.

In the western side there are flat plains and a vast pinewood, then Cala Napoletana, Cala Garibaldi and Cala Serena. Stagnali, with the marina for fishermen and yachtsmen, is the most populated area. The Maddalena Archipelago is intimately linked to Giuseppe Garibaldi, the "Hero of the Two Worlds", and above all the leader of the successful Expedition of the Thousand, concluded with the annexation of Sicily, Southern Italy, Marche and Umbria to the Kingdom of Sardinia, before the formation of a unified Kingdom of Italy in 1861.

Garibaldi, tired and disheartened by his wandering life, had decided to set up home and to dedicate himself to his family, and when he came to Gallura for a game of hunting, he was fascinated by the granites and by the uncultivated land which, however, in some places could have been farmed. He decided that Sardinia would be his home and chose Caprera, which he had admired many times. With its colours and its scenery, it seemed made to measure for that revolutionary, sailor and farmer, now close to his fifties, who had sought the solidity of his ideas around the whole world. And finally, there was solid land, which gave nothing but asked for the tenacity, simplicity and humility of the work that Garibaldi would have given it unconditionally. He had fallen in love with his island. Whether it was beaten by the storm and the strong westerly winds or by the breath of the wind that brought with it the sound of the washing of the sea on the coast, and the resinous scent of the Mediterranean scrub, Caprera had seized his soul and he elected it to live, meditate and die in. He immediately started building what he called the "White House", in the style of the South American fazendas, but that job was not for him, as his master builder told him: "General, using the trowel is not your business", and he humbly replied: "You are right, I will transport the stones" and did the manual works. After a year the house was completed, made of Sardinian granite blocks covered with plaster and lime.

He lived in Caprera for about 26 years taking care of the fields and orchards. Garibaldi planted trees on the island, cultivated the fields and raised chickens, sheep, horses, and many donkeys to whom he enjoyed giving the name of his enemies. He named one Pius IX, another Don Chico (for Francesco Giuseppe), two other Oudinot and Napoleon III ... He planted a magnificent pine tree in the centre of the garden in February 1867 on the occasion of the birth of his daughter Clelia, and that old pine tree is still there.

When he felt the end was coming, he asked to be moved to the room where he could see from a window the sea, Corsica and, out there, he could imagine "his" Nice. Disobeying his desire to be cremated, his body was embalmed and buried in a grave, in rough granite, behind the house.

Garibaldi's heirs assigned to the Italian government the island, which was declared a National Monument on July 4, 1907, and has now become a Museum.

“On your granite peaks, I feel the aura of liberty, oh my wild and solitary Caprera. Your shrubs are my park, and you, awesome stone, offer me a safe and austere abode. Here I contemplate the infinite”. (G. Garibaldi)

In the photo: Cala Coticcio