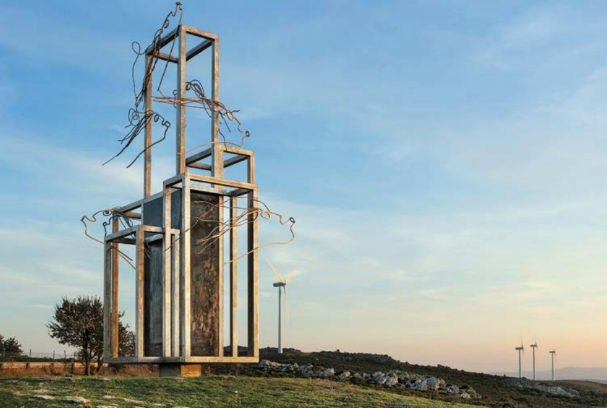 Stretched or tangled, sewn, resewn and unstitched, loose or knotted, the threads are the artistic language of a small Sardinian woman: Maria Lai.

Maria Lai wanted to stitch the world with the woven art of her threads ... an image that brings back to Ariadne’s thread or to Penelope’s weaving but, above all, to the magic of the Janas, the benevolent fairies of the Sardinian folklore who spent their time weaving their thread with a golden weaver in the Domus de Janas, the caves dug into the rock, where the Janas were believed to be living.

The memory threads are at the origin of the creativity of an artist who loved her roots and her homeland.

Maria Lai was born a century ago, in 1919 in the village of Ulassai, (203 km far from the Gabbiano Azzurro Hotel & Suites, and three hours drive) in the Barbaricino region of Ogliastra, Nuoro province, where in 2006 the Museum of Contemporary Art - the Art Station - was dedicated to her, with 140 works donated to the Museum by the artist herself.

Frail and in poor health, Maria owes to her great inner strength the becoming an important artist and a determined and combative great woman who succeeded in excelling among the important artists of her time, men mostly. For many of her works she drew inspiration from the Sardinian women’s daily life. Bread and weavers, embroidery techniques, ceramics and terracotta inspired by fairy tales and Sardinian traditions.

The first Telai (weaving looms) characterize her artistic production of the '70s.

In the '80s she began the "Geographies" and "Stitched Books" cycle as well as the exploration of teaching by creating fairy tales, books, games and workshops to convey the freedom of art to the youngest. In the '90s she merged her previous pencil and ink drawings with the  interweaving of threads and cords that seized her works: the Blackboards, the Geographies, the Stitched books.

Her idea of ​​working on the territory was remarkable, of which "Legarsi alla montagna" (Binding to the mountain) was an operation of great impact, especially on her own villagers, that however echoed throughout the whole art world: Maria linked the village of Ulassai with a blue ribbon whose head was fixed to the top of the mountain above the village. Together with this external work there are other outdoor creations.

Upon this peculiarity of her work, the idea and the accomplishment of the exhibition «Maria Lai. Art in Public Space" was born, set up in the former Convento del Carmelo in Sassari, from 16 November 2018 to 31 January 2019, revising the artist’s iconography of creations made both in public spaces of the island (Ulassai, Villasimius, Cagliari, Nuoro, Carbonia, Orotelli, Aggius, Sinnai, Siliqua, Tortoli, etc.) as well as overseas (Castelnuovo di Farfa, Fara in Sabina, Camerino, Castel di Tusa).

The honorary degree in Literature at the University of Cagliari "for the strongly narrative and conceptual trait of her work, which is however accomplished with traditional, archaic techniques" was conferred to Maria Lai in 2004.

“If the magic of art uses the rainbow, the art of magic chooses between white and black. It  is a game and a rumour but is also tightrope walking on the edge of the mystery stretched between earth and sky” (Maria Lai 1997)