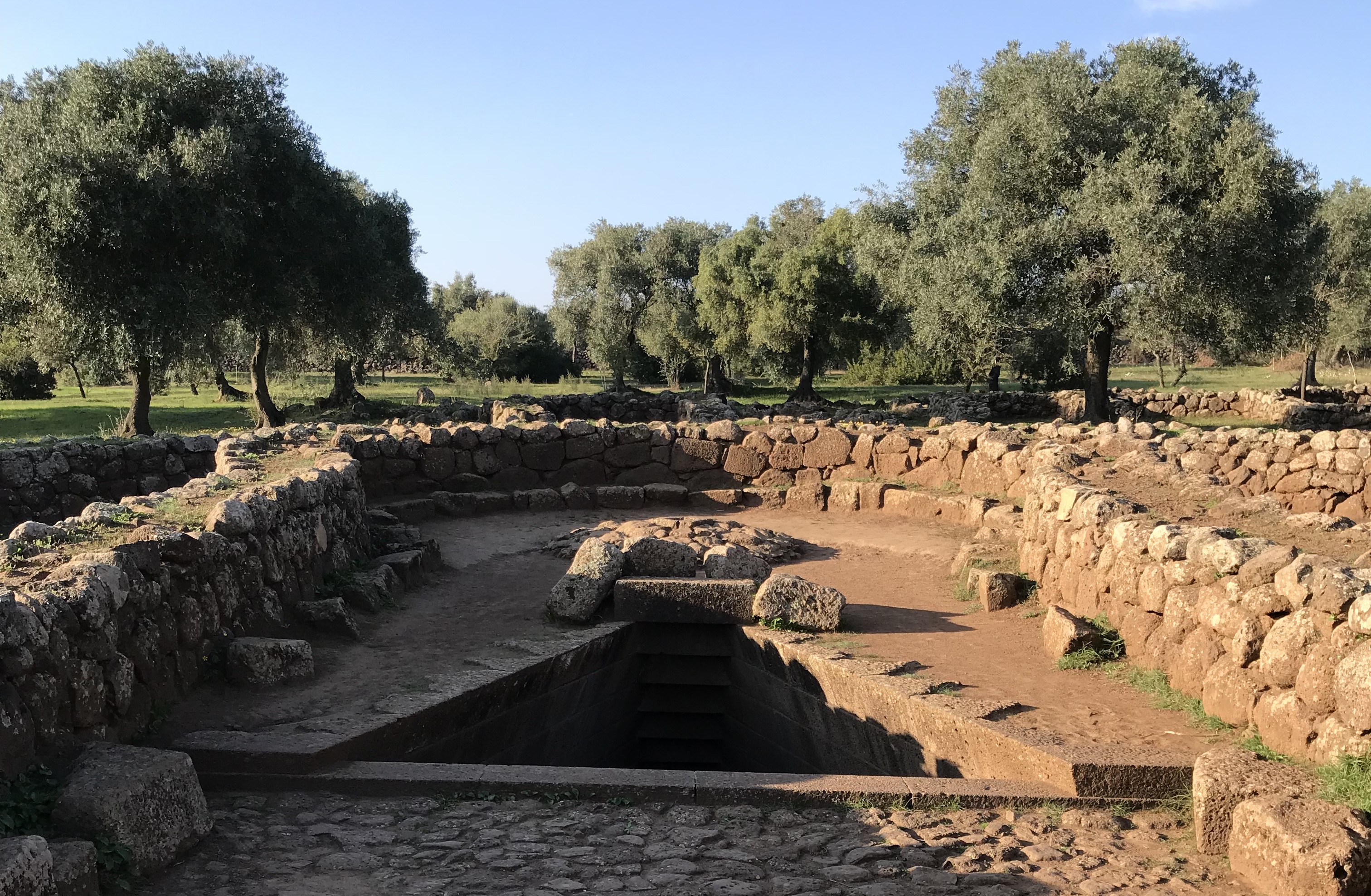 At 178 km away from Gabbiano Azzurro Hotel & Suites, two hours by car, you may visit a marvellous and fascinating Nuragic complex, one of the most important in Sardinia for its proper conservation, dating back to about 1000 years Before Christ. The site takes its name from the 11th century rural church of Santa Cristina. An aerial view would allow the full appreciation of how the structure is so perfect in its proportions.

Positioned in the middle of a green area surrounded by olive trees, there is a large egg-shaped enclosure inside which another insertion, in the shape of a keyhole, which contains a vestibule and the trapezoidal staircase of the sacred well, built with polished stones, a masterpiece of geometric perfection that celebrates the fascinating Nuragic cult of the waters. (learn more about: Plan a visit: Holy Wells & Sacred Springs)

Outside the enclosure, the round hut of meetings, paved with pebbles and with a circular seat, and about a dozen other rooms, lodgings and workshops for ceremonies.

Bronze statuettes from the first millennium BC were found, as well as bronze fibulae of 900/800 BC. and Phoenician gold jewellery, which indicate commercial and cultural activities.

Some archaeologists claim that the well was an astronomical observatory to monitor lunar cycles and predict eclipses. In September and March, on the occasion of the equinoxes, when all over the world the length of the day is equal to the one of the night, the sun illuminates the bottom of the well from the stairwell and is slantwise reflected on the water. If you position yourself on the last steps, you can observe that your shadow reflected on the water is extraordinarily projected upside down on the wall of the opposite room. The phenomenon that affects the moon, however, occurs every 18 years and 6 months, when the moon reaches its maximum height and its light, penetrating from the opening at the top of the well, is reflected on the water. Scholars have verified that the relationship between the base and the height of the dome coincides with astronomical geometry. The well would be a scientific instrument for measuring the heights of the Moon in its passage to the meridian.

Not far away from the holy well, there is a second nucleus including a nuraghe with 6 meters high and 13 meters wide tower, complete with the staircase, the room, with the intact ceiling, and the fenced Nuragic village where the archaeological site is yet to be completed.

But why is it called the well of Santa Cristina? The best-known legend says that Cristina, a beautiful shepherdess, persecuted by her father because he wanted to sell her to a lordling in the village. One day, when her father was chasing her, she prayed with fervour the sky to save her and suddenly the ground opened under her feet, swallowing her, leaving a conical hole. People proclaimed the girl Saint, and a church was built in her honour not far from the well. The Nuragic complex, around the well where the young woman fell, took its name from Santa Cristina. But the other option is also interesting. From the archaic ḫirim-šu-tu (basket-well for ceremonial functions), it becomes ḫirištu, therefore combined with Christu. But why use the female “Cristina”? Because the well was dedicated to Mamùsa, the Goddess of Waters… and eventually things go full circle!

At about 10 km away from the Nuragic Complex of Santa Cristina, in the same Paulilatino territory, you may also visit the Nuraghe Losa, one of the most famous, well-preserved and representative megalithic testimonies of the Nuragic civilization.

"It represents the culmination of the architecture of the water temples. It is so balanced in proportions (...), studied in the geometric composition (...), so rational (...), not to be able to realize (...) that it is about works constructed close to the year 1000 a.C. ". (Giovanni Lilliu - Archeologist)