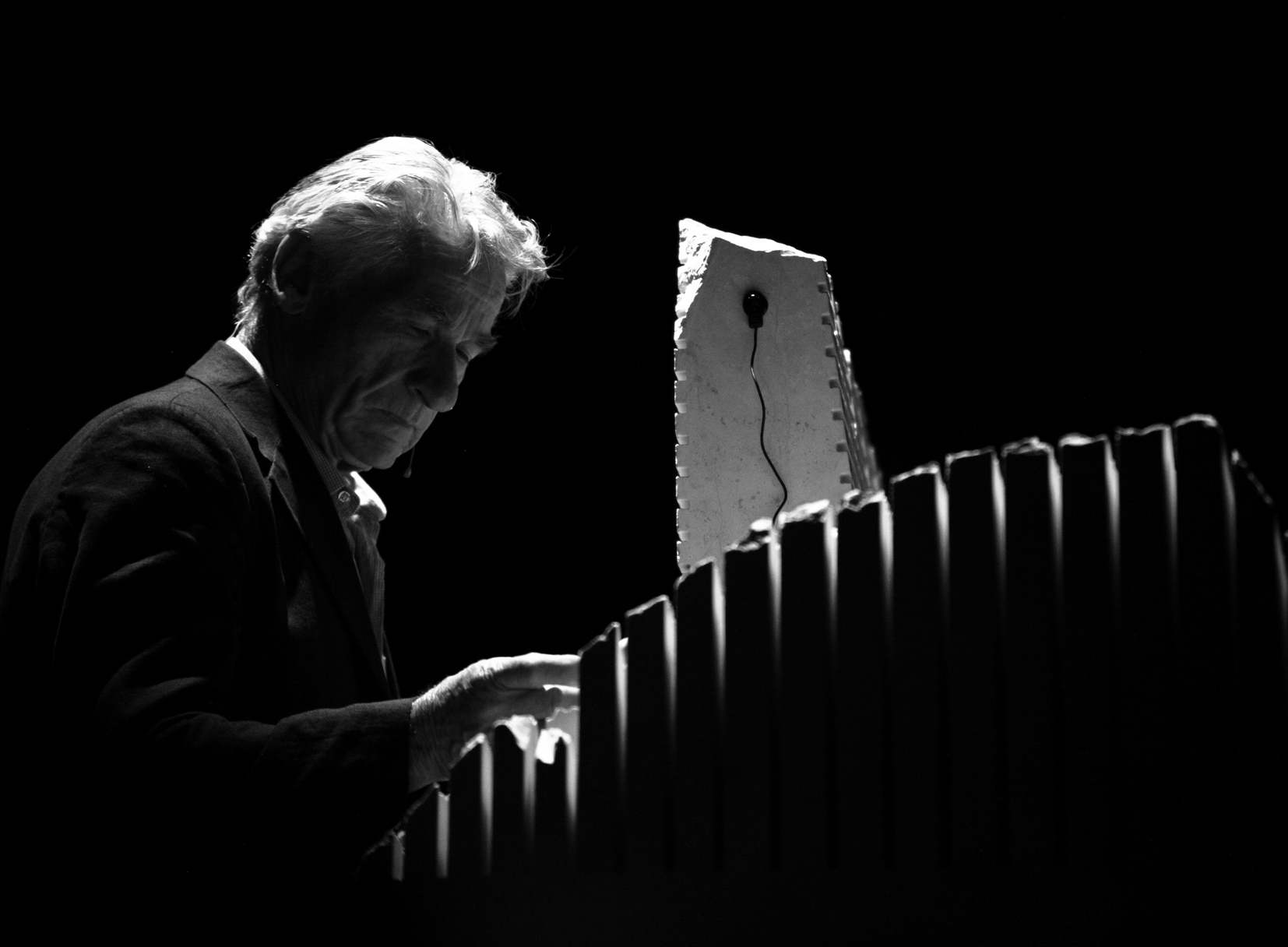 Golfo Aranci’s promenade is embellished with two "Sails" carved in stone plus a group of three soundtracks by Pinuccio Sciola (15th March 1942 – 13th May 2016), the only sculptor who managed to make the stones sing. Speaking of the sculptor and muralist Pinuccio Sciola is like telling a story of magical wonder. Sciola, with his sounding stones, thanks to his national and international reputation, has been an outstanding representative of Sardinia Island and of the Island's culture in the world. He claimed that he was born from that same stone from which he extracted the sound he made the whole world known of. The sound faculties of his works, created by engraving parallels cuts on the rock, allow his sculptures to generate sounds that spread in the air once caressed with the hands or with small stones, and in relation to the engraving and density of the stone, recall the sound of metal, glass, wood and even the human voice.

As Michelangelo said, "Every block of stone has a statue inside it and it is the task of the sculptor to discover it", also Sciola was convinced that by engraving the rock, the sounds - which for millennia had been trapped inside – may be released, rendering his sculptures the portal between past civilizations and the present. And to Michelangelo, who addressed his Moses shouting: “Why don't you speak to me?" Sciola has launched the challenge: "Michelangelo needs to know that the stone can actually sing, it is alive, it speaks, even though he is convinced of the opposite. And today, in front of him, I will prove it." Taking one of his works, Seeds of Peace, in front of Michelangelo Buonarroti’s tomb, in the Basilica di Santa Croce (Basilica of the Holy Cross) in Florence, after praising and rubbing his hands, he began to caress the stone, making it vibrate, dragging its voice out, raising it from the rock’s core.

So the Sardinian sculptor was able to tell Michelangelo that he was wrong by saying that matter cannot speak. "But it was not his fault!", explained Sciola, "he was right in believing that the stone was not able to express itself. The statuary marble he used has physical properties that don’t allow it to vibrate. That's why his Moses could not speak. But it was correct to let him know that stone is the lively existing element that keeps the memory of everything. And now he knows, I told him."

Sciola used to say that any type of stone was available in Sardinia. And if a variety of stone is not found there, it is only because God, in creating the world, kept it in his pocket. With his Sardinian stone sculptures, almost timeless modern menhirs, he was able to release sounds, different according to the density of the stone and the engraving, sounds that can recall glass, water or metal, giving voice to the earth's bowels or the depths of the sea.

Pinuccio Sciola was born in 1942 from a family of peasants, and a scholarship allowed him to attend the Art Institute of Cagliari. After the art school, he attended the Art Magisterium of Florence and the International Academy of Salzburg. He enrolled in the University of Moncloa in Madrid in 1967, while the following year he moved to study in Paris. He transformed his hometown, San Sperate (CA), into a Paese-Museo (a Country-Museum), starting in 1966 initially by painting the walls of the houses in white and inviting many artists to fill with their paint works on the village walls. The seventies were a decade dedicated to "muralism", which had also influenced many centres of the island. Today in San Sperate there are 260 murals on the walls of its streets, mostly made on plastered walls and painted with biancone (white plain paint) with waterproof colours. Other works are instead performed with graffiti and mixed techniques.

Sciola travelled extensively with his works: in 1973 in Mexico City to work with the master David Alfaro Siqueiros; in 1976 at the Biennale in Venice; in 1984 at Besana and in Piazza degli Affari in Milan; in 1985 the at the Quadriennale in Rome and between 86 and 87 with a large travelling exhibition in Germany. In 1994 in Belgium; in 1996 in the Palace Trianon of Versailles, and the following year in Vienna. In 1996 his sound-stones were played by the percussionist Pierre Favre at the Time in Jazz in Berchidda; in 1998 he was in Germany; in 2000 at the Hannover International Expo and in Havana; in 2002 an exhibition at the Müvészet-Malom Szentendre in Budapest, in 2003 the architect Renzo Piano chose a monumental sound sculpture for the City of Music in Rome. In 2006  the "Carved Sound System" was made in Villa Delle Rose in Bologna. In 2008 Sciola covered with the "Seeds of Peace" the churchyard of the Basilica of San Francesco in Assisi. In 2010 he inaugurated the "Sound Stone" in the garden of the Triennale di Milano, while in 2011 he inaugurated the exhibition "Città sonore" at the Italian Cultural Institute in Madrid.

On 11 July 2012, the President of the Italian Republic Giorgio Napolitano appointed him Commander of the Order of Merit of the Italian Republic, also inaugurating the monumental tricolour of Sciola at the port of Cagliari "The stones of culture to consolidate the foundations of the unity of Italy". In 2013 his works were in Shanghai. In 2015 he received the "Marble Woman Award 2015" for his important contribution to the history of sculpture.

Pinuccio Sciola died on 13 May 2016. Through the Sciola Foundation, his three sons continue his life philosophy and his artistic research.

“The sound comes out by caressing it and the lighter the touch is, the greater is the emotion the stone passes on with its voice”. (Pinuccio Sciola)