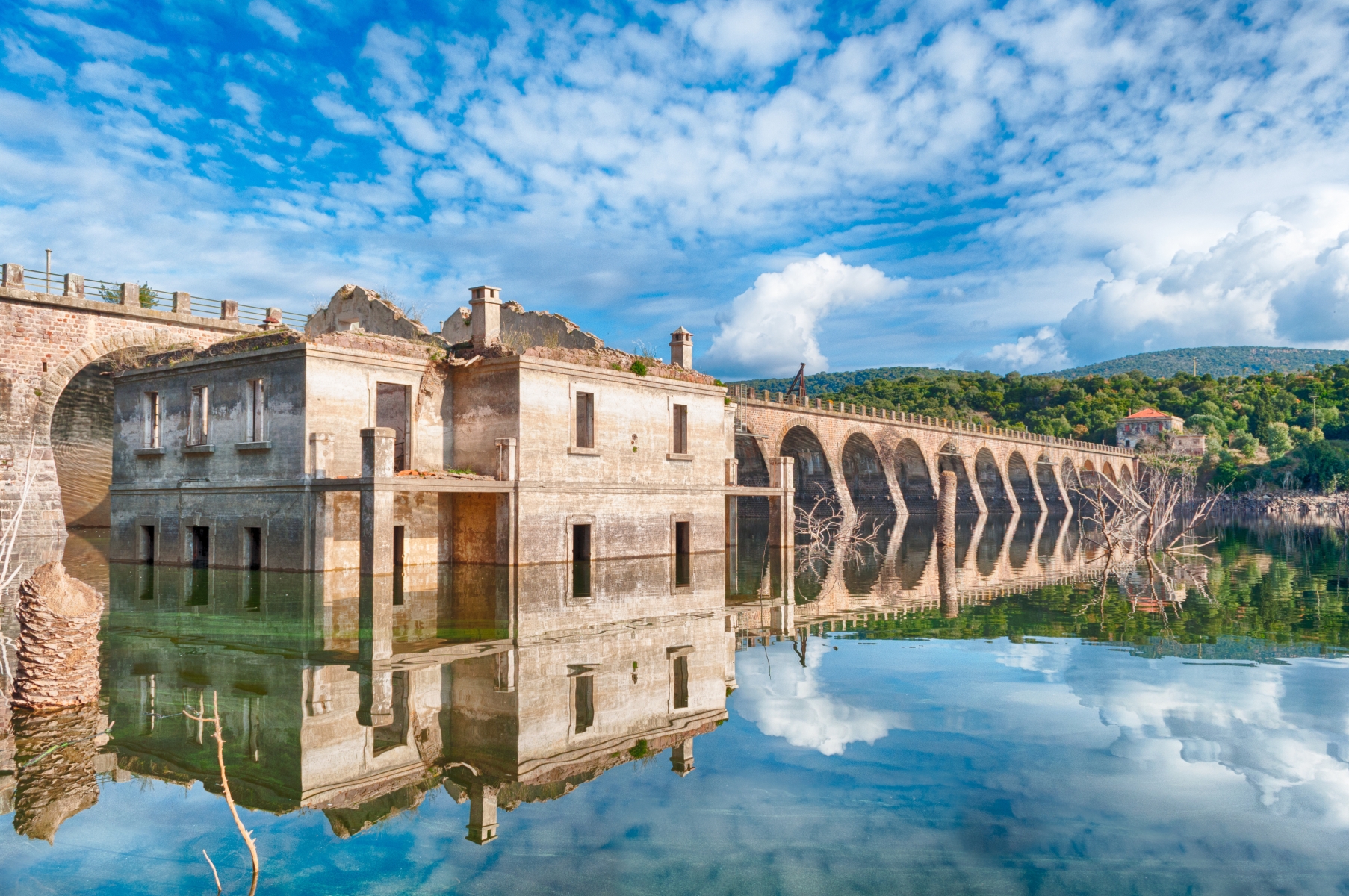 The Omodeo Lake, the largest artificial basin in Europe, is a casket of submerged treasures: Tombs of the Giants, Domus de Janas, a Pre-Nuragic settlement of Serra Linta, a 20 million-year-old fossil forest, the remains of the village of Zuri, and also a Ghost House that appears in drought and disappears when the water level rises.

2 hours’ drive and 160 km far from the Gabbiano Azzurro Hotel & Suites, the dam on the Tirso river is located in central Sardinia. The lake is named after the engineer Angelo Omodeo, who also participated in the construction of the large dams on the Nile, who oversaw the design of the first dam, built in 1918 and finished in 1924 when King Vittorio Emanuele III inaugurated it. The hydroelectric power station was also built downstream of the dam. For the reservoir, the village of Zuri was sacrificed, then rebuilt upstream, while the ancient Romanesque church consecrated to St. Peter from 1291, was dismantled and rebuilt, numbering piece by piece between 1922 and 1923 with the original material.

Subsequently, in 1997 the old dam became obsolete because between 1982 and 1997 another one was built, named after Eleonora d'Arborea. Higher and more capacious, it caused an increase in water height, by submerging even what had been spared by the first dam. The purpose of the second dam is irrigation, hydroelectricity and drinking water. It has been in operation since 2000, with a capacity of 792 million cubic meters of water.

It is a really interesting tourist destination and, despite the reservoir being artificial, it remains in the context of a wild and fascinating Sardinia, where there are interesting Nuragic archaeological finds, as well as submerged ones, and beautiful vegetation, which includes, in addition to the Mediterranean Scrub, the holm oak, the white poplar, the willow, the field elm, the ash, the tamarix and the laurel. Thanks to the lake, there are numerous species of water birds, both sedentary and migratory. The jay, the peregrine and fisher falcon, the mallard, the wild goose, the little egret, the white and grey heron, and others.

But out of the waters of Lake Omodeo during the dry periods, as mentioned above, marvels emerge: the Tombs of the Giants, the Domus de Janas, the various nuraghe all of silt colour of the that settles with the drying up of the water. Only rows of stones remain of some nuraghe because regrettably in the early nineteenth century some were dismantled to build dry-stone walls.

And then there it is! The Ghost House, rising with its worn-out beauty due to the long immersion but retaining all its mysterious charm. It was probably a beautiful two-storey comfortable villa that belonged to the rich bourgeoisie, surrounded by a garden with a pond and an orchard. On the ground floor there was the kitchen with the cooking fireplace, a lounge, a small living room and a storeroom. On the second floor there were four bedrooms and a bathroom, and above that another roof space. All together with six heating fireplaces. The staircase in front of the villa today degrades towards the lake, but in the past, it might have been used to descend towards the shore of the Tirso.

I like to imagine the times when the children of the villa ran in that garden, looking for the marsh tortoise and the land turtle among the stones, or the nests of the big-eyed birds while the jays flew and sang on the trees of the orchard.

Then the rain arrives and with the flow of water the level begins to rise, once again hiding the Ghost House and all the other treasures of the Sardinian Nuragic civilization.

“And above all, watch with glittering eyes the whole world around you because the greatest secrets are always hidden in the most unlikely places. Those who don't believe in magic will never find it.” (Roald Dahl)