The Petrified Forest of Carrucana 0 Comments 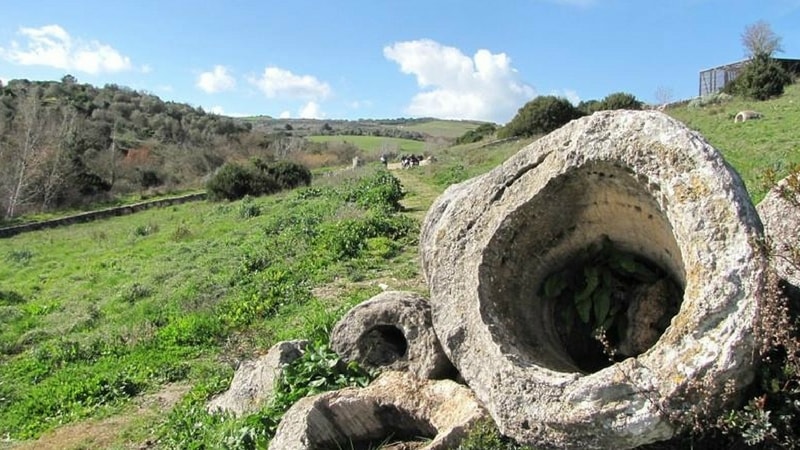 At one and a half-hour drive from the Gabbiano Azzurro Hotel & Suites, 106 km far, in the Oristano province, there is a wonderful oddity to visit: the Carrucana's Petrified Forest, unique in its kind, which concerns the Martis, Bulzi, Laerru and Perfugas municipalities. In 100 square km, there is a forest of 20 million years ago, which was submerged by lava material after a volcanic eruption and then fossilized. Petrified forests are always consequences of mega catastrophic events affecting large areas. Ashes of the volcanic eruption, very rich in silicon, created about 20 million years ago (Miocene) the optimal base for the fossilization process of the forests sank by the earthquake in the surrounding lakes.

"When vegetable remains are transformed into minerals… here there was a decidedly different landscape and climate, consisting of lakes, forests and volcanoes that at some point "interacted" with each other, as in a huge alchemical crucible.” As Marisa Uberti, researcher and founder of the cultural site “Two steps in the mystery” proficiently recounts.

They are fossil tree remains in the form of stumps, some in a vertical position, others lying on the ground where the fossilization process has kept their shape intact.

The peculiarity of the Carrucana Forest remains' is the size of the petrified trunks, really admirable, in the shape of large "muffs" and in the layers of opal, chalcedony or large quartz crystals that have transformed the vegetable into mineral.

In 1992 the Paleobotanical Park was created, with the purpose of safeguarding and enhancing the area. The park is characterized by shady galleries, wooden installations that at first sight look like transparent sheds or very long chalets. Instead, they are very modern wooden structures, designed by the architect Giovanni Maciocco, strategically placed on the reliefs that dominate the territory, to create observation points between the sites and the most important areas and to house the descriptive images of paleobotanical resources.

In 2011, the Anglona Paleobotanical Park project was ranked by the Ministry for Cultural Heritage and Activities, in ninth place in the special Italian classification of the Council of Europe Landscape Prize among the 95 presented. Unfortunately, the project, although receiving several awards, has been stuck and the structures are still without illustrative panels, being still unknown when they will be inaugurated together with the entire Paleobotanical Park project. The missing interventions would concretize the territorial development enhancing this important and unique kind of resource of the Sardinian territory.

"... The petrified forest is another extraordinary surprise that the itinerary in Anglona has reserved for us, more and more a candidate to leave in us an intense nostalgia and desire to know it better, discovering its many aspects and inexhaustible secrets!" (Marisa Uberti )

Image taken for the web