The Pillar of Light in Golfo Aranci 0 Comments 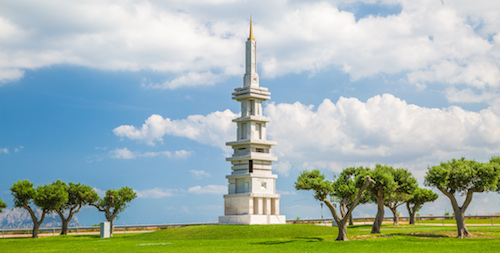 On the 11th August 1932 in Golfo Aranci, Sardinia, Guglielmo Marconi was the first person to successfully undertake an experiment with an efficient system of wireless telegraphy using extreme radio waves.

The brilliant idea that more than 80 years ago revolutionized the future of humanity was announced to the world by Marconi himself, from his yacht-laboratory, Elettra, that was moored in the Sardinian waters of Golfo Aranci.

It was the culmination of a series of applications in physics, electrical engineering and radio communications. Marconi was able to communicate clearly with the radiotelegraph and radiotelephone located on Rocca di Papa from Capo Figari (Golfo Aranci's promontory) over a distance of 270 km. It was definitely a privilege for Golfo Aranci to host the great scientist.

In 2014, upon the initiative of the local Council, the tributary celebrations to Marconi has been enhanced by the opening of a large granite sculpture about 12 m high, symbolically called “La Colonna di Luce" (The Pillar of Light). This is an extraordinary work by Italian artist Lorenzo D'Andrea. It is constructed from overlapping blocks of gray-pearl granite of various shapes and sizes, in order to create a game of mirrors, radiating light beams in different directions through its full height. It is an innovative sculpture, just like the great discovery of Marconi.

The sculpture is a tribute to the great scientist but also aims to adorn and beautify our landscape. It has been located on the main roundabout at the entrance of Golfo Aranci and the opening celebration took place on the 20th July 2014, at the presence of the all community of Golfo Aranci and Princess Elettra, Marconi’s daughter.

Golfo Aranci, with its beautiful beaches, the Promontory of Capo Figari and Figarolo Island have now a gate that symbolize not just the entrance to a place of extraordinary natural beauty, but also of culturally and historically relevance.