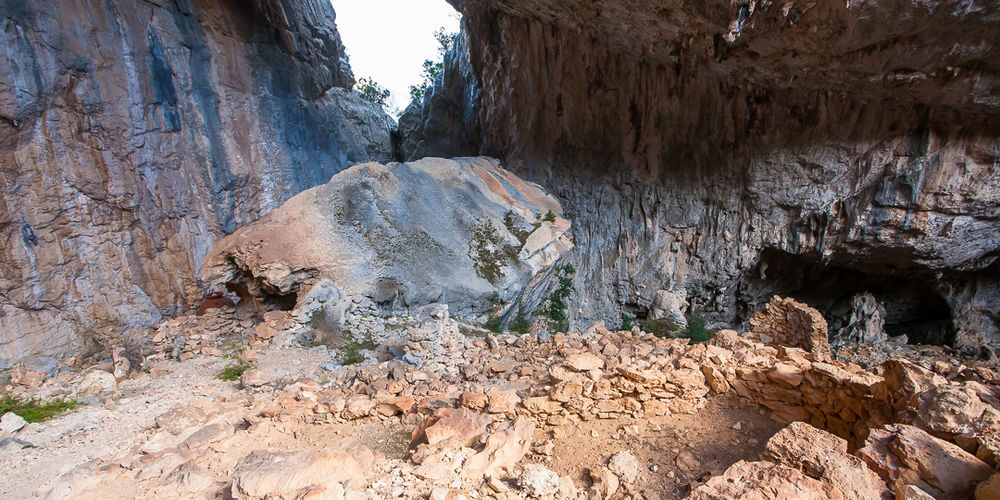 Tiscali, the well-known Sardinian telecommunication company, founded in 1998 by Renato Soru, is well known to most of Italians, but perhaps not everyone knows that the company owes its name to the Sardinian mountain Tiscali, inside which there are the remains of a Nuragic village dating back to the period between the fifteenth and eighth centuries BC.

Mount Tiscali, just 518 meters high, is a true natural fortress of nature, inside one of the most strategic and inaccessible areas of the Supramonte, (read about Supramonte here) marking the border between Olièna and Dorgáli, a territory that is a real open-air archaeological park.

I wrote "inside which" because it is appropriate to describe the Nuragic site, which is located right inside the mountain in a partially collapsed doline that, as a large cave, houses the village nestled within it. A truly unique place, where time seems to have stopped, invisible to the eyes until you get inside the cave. The village consists of two groups of huts of various sizes. Their construction system is different from the ones of other Nuragic sites and the water collection system suggests long periods of resistance against Roman invaders.

Dorgali was in fact occupied by the Romans who built a road to Nuoro passing from the Su Gologone springs. Subsequently, also the territory of Oliena was occupied and the Nuragici (Nuragic people) sheltered on the impervious slopes of the Supramonte, saving three villages, one of which was Tìscali. From there they continued to attack the Romans, hindering the use of the road and of the areas they cultivated. The Romans responded by systematically burning the Olièna Supramonte forests to push back towards Orgosolo the Nuragici herds, creating a desert hollow parallel to the Roman road. The Romans started calling the Olièna Supramonte with the name of Tesca to indicate sterile, uncultivated and desert places. Horace spoke of Tesca calling it deserta et inhospita. (desert and unwelcoming) From the Tesca derives the Italian word teschio (skull).

The name remained for Mount Tesca, to which was added the Sardian suffix -li. Tesca-li, then Tìscali which could mean high ground or barren territory. There is, however, another option, which instead derives from teš (pride) + kalak (courtyard), then teš-kalak, (pride courtyard) meaning that the inhabitants always kept up with the invaders, transmitting to the future generations the memory of national pride.

Therefore, if you are a trekking fan, to reach the doline that contains the Nuragic village inside Mount Tiscali, prepare yourself for an intense trek of a couple of hours along a fascinating ancient territory to discover a hollow in the heart of the Island. Arriving from Dorgali (an hour and a half by car and 116km from the Gabbiano Azzurro Hotel and Suites) from the "Sa barva" bridge the route is well indicated with signs and arrows on the rocks.