A Journey Into The Local Past: Sa Domo De Marras 0 Comments 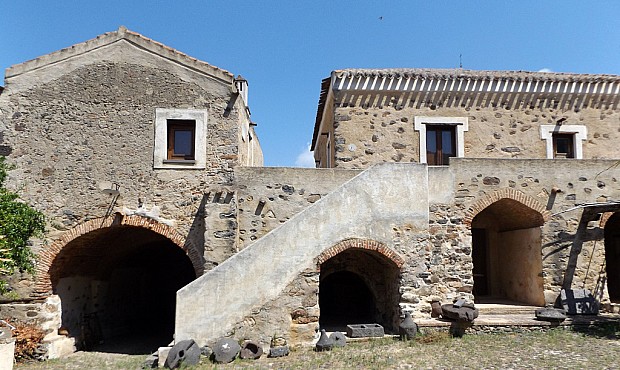 An excursion from which I brought back with me a captivating experience was at the ethnographic museum "Sa Domo 'e Sos Marras", an ancient eighteenth-century manor house, located in the historical centre of Galtellì, in the Nuoro province, 110 km far, one hour and forty by car from the Gabbiano Azzurro Hotel & Suites. The aura of the house, which has kept the atmospheres of the past, lets the mind fly free with imagination.

The visit has been a fascinating journey into the Sardinian past of three centuries ago, the perfect stage to locate the characters of "Canne al Vento" (Reeds in the wind), a novel by the Sardinian Nobel Prize Grazia Deledda.

Not far from there, in fact, there is the house where the three Pintor ladies of “Reeds in the Wind” book spent their lives protecting the declining of their youth. The man showing us around the Museum, explaining with skill the use of the tools and the habits of the past landlords, could easily be Efix (Efisio, common name in the south of the island), their faithful servant.

And with the help of “our” Efix, we learned that the building was inhabited until 1970 by the Marras family, and restored in 1995 preserving the traditional architectural features including the embattled tower as if it was a real castle.

The archaic places of life and work are reconstructed on a two-storey building, showing utensils and tools of agricultural and pastoral society. From the entrance door, passing under an archway above which there is the living area, you enter the courtyard paved with ancient pebbles flooring and you may see the well, of vital importance. All around the courtyard are the loggias, housing machinery and tools which were used in agriculture and in sheep farming.

There is a wine cellar with a wooden wine-making press, a sheepfold, the weaving room (“sa domu ‘e su telaiu”), with a precious horizontal juniper-wood frame from the XVIII century, and the area of the wooden toys used by children, rag dolls, wheeled carts, pets and small guns made with marsh reeds.

Going up from an external staircase near the entrance, you reach the first floor, in a veranda with two entrances, where one leads to the kitchen, ("sa cuchina") equipped also for making bread, where Efix proffers an interesting explanation on the baking process. Another entrance leads to the corridor leading to the rooms of the main apartment, furnished with awesome XVIII century antiques.

Still filled with the eighteenth-century aura of the Sa Domo de Marras, we head towards another peculiarity of Galtellì: its castle, of which only the ruins and the legend remain, revealing how the spirit of the latter Baron, keeper of hidden treasures, guards over the ruins of the castle, of which Grazia Deledda narrates:

"One night of last December I remained more than two hours attentively listening to a woman from Orosei who was telling me about the legends of the castle of Galtellì. Her accent was so sincere and her conviction so deep-rooted that I often stared at her with an indefinable jolt, wondering if, by chance, these bizarre stories of supernatural, which run inside the people's houses, have no foundation, and something real."