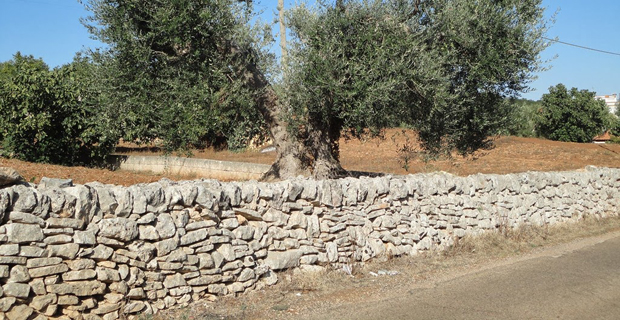 Half a century ago, Ferdinando Manno wrote in his "Centuries among the olive trees": "For generations and generations, the farmers gathered this immense quantity of stones ordering them one by one in rural securing farms, gardens and fields in a network of trees courtyards. It is an explosion of geometries, same stones also used to construct nuragic huts for shelter, during the night, guarding against petty thieves and goatherds, the enemies of the earth, the age-old opponents of the possession instinct of peasants. Now, in times of industrial milk, they are collapsing architectures, the remains of life and traditions off for consumption".

In November 2018 dry-stone walls were named by UNESCO as Intangible Heritage of Humanity. The recognition is not attributed to a particular place but to the art and rural practice in general that realize these walls with dry-stone without using mortar or other mixture. An ancient activity, which is found in Italy, Croatia, Cyprus, France, Greece, Slovenia, Spain and Switzerland, the eight European countries recognized holders of "The art of dry-stone walling" by UNESCO. The dry-wall was the first man-made construction and is widespread throughout the world. An art where every stone must have its right size for the right place.

Among the first, the millennial nuraghe of Sardinia were built with dry-stone, as well as the walls of the of ancient houses, built with blocks of stone.

Those who travel the Sardinian hinterland can appreciate the many testimonies of this art of rural culture made with the raw stone of the place. Sometimes you do not even need to model them: the wind and the saltiness moulded them in the present shape.

Carefully harvested by the callous  peasants' hands while cleaning the land to be cultivated, for centuries the stones were neatly placed on top of each other to get the low walls where the air does not find obstacles and blows through, where the humidity is rightly drained creating all over the place the optimal environment for micro-flora and micro-fauna.

The stones can be flat, square or round, hard or porous used to protect villages, borders and properties. There are two accomplishment systems: either with the rough stones found on the very spot or with semi-finished stones even coming from different places from where they will be used.

The result is common to both techniques in being in perfect harmony with the environment and UNESCO adds: "play a vital role in the prevention of avalanches, floods, avalanches, in fighting land erosion and desertification, improving biodiversity and creating the best microclimatic conditions for agriculture".