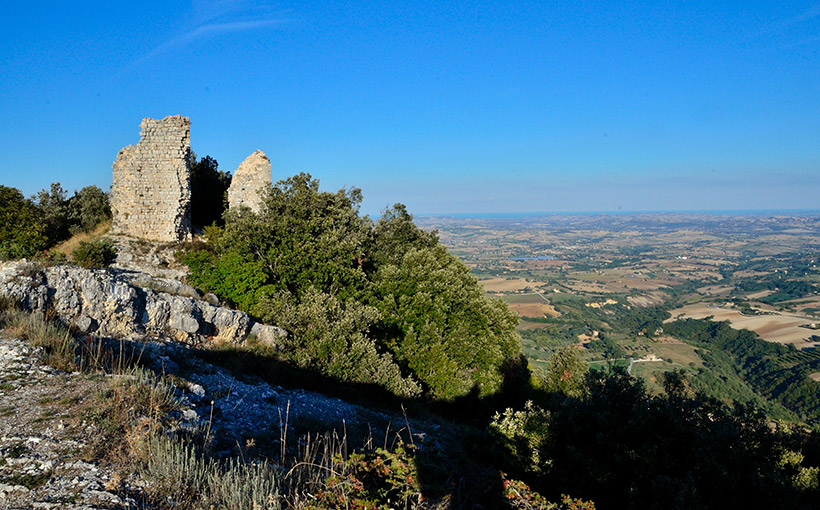 The remains of a fortress dating back to the medieval period (10th-11th century), on Mount Limbara, are located in a place called Giolzia. Within history and epic, here is the fascinating story of this feminine legend of Sardinia: Giolzia, the Warrior Princess.

Judge Comita had three sisters, Giolzia, Caterina and Preziosa, but Princess Giolzia, (Giorgia), was a girl who had little to share with the lassies of her time. She was a span above common people. At the age of 10, she raised and trained a hunting falcon, a purely male task, but she had learned how to achieve it by observing her father and brother. The became her playmate and with him, she spent a lot of time in the castle's woodland surroundings. From the top of Torres's castle, she could see the coast and one day she decided to follow a brother's dog that she knew was used to go to the beach. Imitating the animal, she immersed herself in the sea and, to her surprise, discovered that she could float in the water that embraced her, giving her a feeling of complete free happiness. From that day on, when she could, she would go to the beach and soon become a good swimmer. Her sister Caterina found out of her wandering around and she was soon sent to a small village near Monte Acuto; that land became her new home. took care of the family possessions with great commitment and ability. She controlled the flocks in the pastures, in the shearing, she handed the wool to the women of the country who spun and wove it. She managed the finances of the kingdom using the income for necessary works and embellishment, such as the church of Santa Maria del Regno and the castle in Ardara. She led her troops against the Gallura is and took prisoner the judge Ubaldo di Gallura, detaining him in Ardara. As an excellent rider, she went riding through the whole kingdom until one day she arrived in the area of Bala, near the village of Vriquilla, Berchidda (learn more about Berchidda here).

It was spring and the Bala torrent was spectacular with its waterfalls. To the northwest of the river was a superb and massive rock: there decided to build her stronghold. Between the valleys and scrublands, there were man-made boulders, pottery shards and small stone axes and arrowheads. Was that the area inhabited by the Balari? Was it there that her ancestors had defended their territory and their civilization? She discovered the remains of a structure comparable to the many scattered in the territory that she knew: the nuraghe.

The Limbara, whose name means border of the Balari, a boundary between the Eastern Logudoro and Gallura, would have hosted the fortress with her name: Giolzia.

Years later, as she was used to, she left with her dog for the walk she called "looking for ancestors" among ditches, hedges and thick bush...

"In the evening the dog alone came back to the fortress. The men in vain waited for the princess. Research on the whole territory was useless. Giorgia had disappeared and nothing more was heard of her. Only the stream of Bala and the heights of Limbara know about her finale and even today, to those who know how to listen to the voice of time, they tell the story of the mythical princess who wanders between rocks and ravines on moonlit evenings, in the footsteps of the ancestors." ("A cascade of words" by Maddalena Corrias).