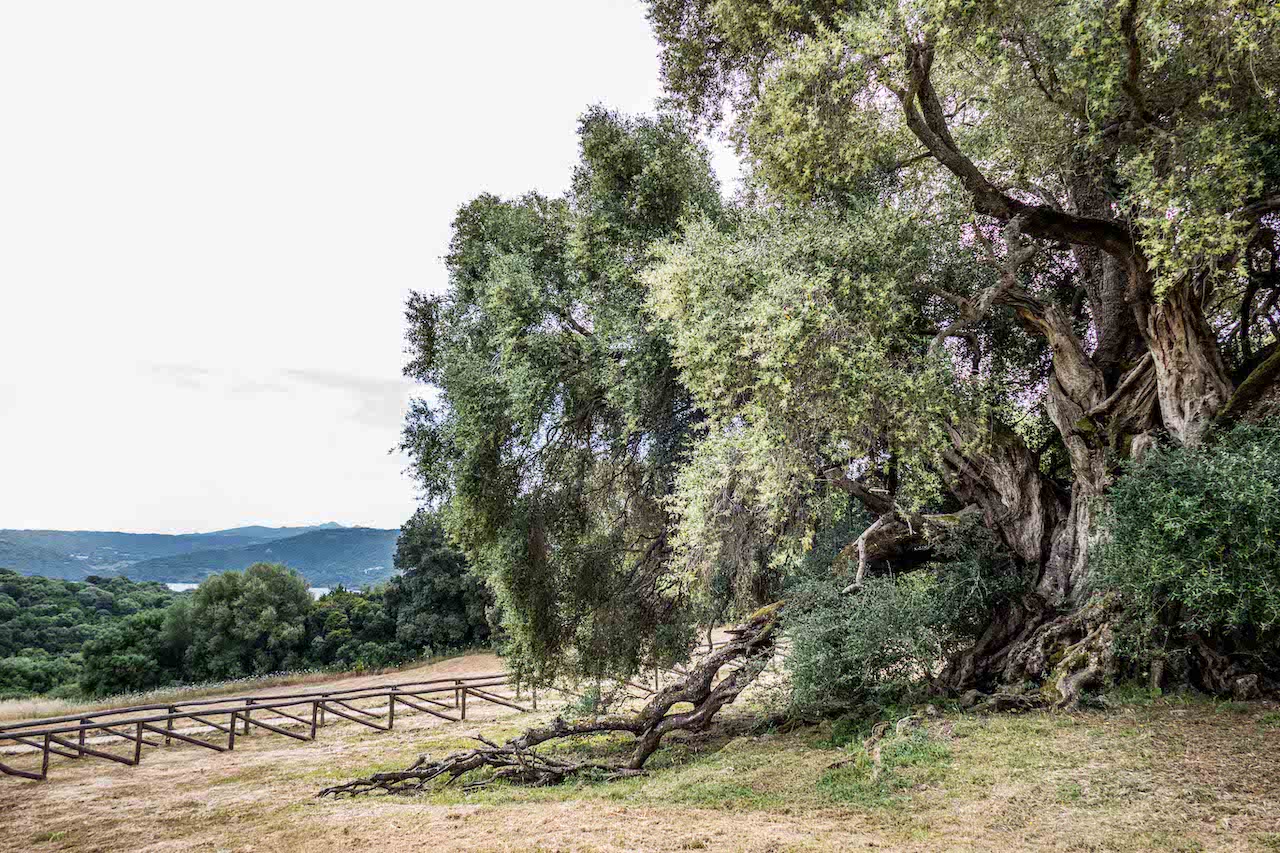 Sardinia, an ancient land rich in naturalistic, historical, artistic and cultural privileges, also claims its oldest living identity, S'Ozzastru, the oldest olive tree in Italy, which is over 4000 years old. It is in Gallura, in the municipality of Luras, Sassari province, 58 Km far and one hour drive from Gabbiano Azzurro Hotel & Suites. It is an Olea eureopaea specimen and, despite its age, enjoys excellent health.

When S'Ozzastru sprouted its first tender leaves, the Jews fled Egypt led by Moses and the Phoenicians already left evidence of early alphabetic scriptures. In Sardinia, the Nuragic Civilization began. S'Ozzastru saw the proud and evolved people of his island building the Nuraghe (read The Nuraghe: Ancient Heritage Of Sardinia), the sacred wells (Plan a visit: Holy Wells & Sacred Springs ), and Tombs of the Giants, being protected by warriors armed with daggers or swords, bows and arrows, The Shardana: Warriors Of Sardinia . He welcomed the Phoenicians who arrived as merchants and non-invaders (see Tharros The Phoenician Town). He feared first the hordes of the Carthaginians, then the Romans and finally the vandals. When Jesus was born, he was already on earth. He liked Sardinian Judicates, with a special preference for Eleanor of Arborea. During the reign of the Aragonese he experienced the worst period in the history of his beautiful island, suffering the blockade of economic, cultural and social progress. S'Ozzastru saw the Moorish incursions, their expulsion and the birth of The Sardinian Flag. He assisted to the failure of the attempt to modernize the island by the Savoy and was present when the Kingdom of Sardinia was established. He anxiously controlled the Sardinian uprising and one day also met Garibaldi Caprera: Garibaldi's Sardinian Island, who, looking for the ideal place to stop to live, meditate and die, paused to rest under his foliage to enjoy the beneficial coolness. He was always there, S'Ozzastru, when a young foreign Prince Karim Aga Khan was seduced by the splendid sea of ​​the island and by its fragrant and wild land, with its ancient origins and its millenary traditions and decided to offer the Emerald Coast to the modern tourist world.

S'Ozzastru, "the patriarch of all the olive trees" or su babbu mannu "the great father" as the Sardinians call it, is 14 meters high. it has a trunk of eleven and a half meters in circumference, and the foliage measures 21 meters in circumference. Since 1991 it has been declared a natural monument. Looking at it, one feels as small as in front of a cathedral. The trunk seems furrowed with wrinkles almost like the body of an old sage man who has lived the passing of seasons and weather phenomena for an incalculable time. Witness of the man’s evolution, if its branches could tell us what they saw, the people who sought shelter under its branches, the changes over the years ... standing in front of S'Ozzastru, it seems to be enveloped by energy that its long life is testifying in almost mystical silence. In fact, the tree radiates a great energetic charge and legends considered it a refuge for souls.

It seems that its wood was used to manufacture the famous tool, su bunchccu, a hammer used in the past by A merciful killer: the mysterious female Accabbadora: "she who terminates." A specimen of the hammer can be seen in Luras, at the "Galluras'' ethnographic museum. The legends on this tree are infinite as infinite are the events that have passed by it. Today it lives in an area surrounded by greenery, peace and silence of the countryside away from the noise of civilization. A little further on, the Liscia artificial lake, a barrier built on the river of the same name, has a surface of the liquid mirror of approximately 5,700 km² while its total volume is calculated at 108 million m³, in the locality of Santu Baltolu di Carana, where these arboreal patriarchs have existed for thousands of years. Reaching Lake Liscia from the Gabbiano Azzurro Hotel & Suites is a pleasant 58-kilometer route, passing near the Coddu Vecchiu Tomb of the Giants and near the Albucciu Nuragic Complex and the Nuragic Archeosite La Prisgiona. Sardinia is the region with 285 living monumental trees, out of a total of 2407, surveyed and certified by the Ministry of Agricultural Policies

“I have long contemplated this old olive tree grown in arid land bent and dug by the mistral wind beaten by storms and burned by the scorching sun. However, laden with fruit, it gives fragrant oil like someone who, after a hard life, still lives by giving confidence and creating hope.” (Father Enzo Bianchi)