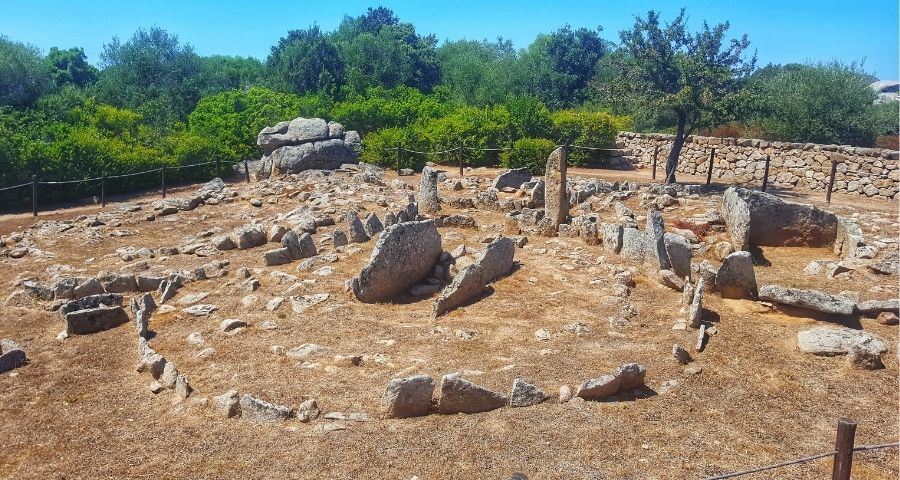 The Megalithic Circle is a type of burial also called "Megalithic Circles Culture", a phenomenon localized in the historical region of Gallura beginning around 3500 BC, formed by a series of concentric circles of stones, to limit a mound of earth and covering chippings, covering a small stone-built coffin-like box, called the cist, in which the dead were placed.

And once again we are enveloped by the mystery and the curiosity to disclose it: why did they bury their dead this way? The concentric circles are among the oldest symbols in the world, which channel an infinity of ancient contents, fundamental in the creativeness of ancient societies all over the planet. In Sardinia, we often find them, inside some Domus de Janas, in the Menhirs, in everyday’s objects, as Sa Pintadera. They can represent the celestial dynamics, the eternal cycle of the wheel of existence. This meaning could be applied to the rings which, circling around the tomb, lead back to life, death and rebirth cycle. Then there are the megaliths placed outside the enclosure of the burials almost as sacred protection of the area, because the Sardinian civilization created the divinity, through the "bones" of the earth, the stones. "They sought, and found, the Divine in Element, in Stone." The megaliths are sometimes modelled by "hollows" perhaps worn out by hand rubbing because they were considered sacred and believed to be healing by touching them.

In the context of megalithic funerary architecture, the singularity of the Megalithic Circle was discovered for the first time at the Li Muri site, about 40 km and 40 minutes drive from the Gabbiano Azzurro Hotel & Suites. The Necropolis of Li Muri is the oldest site of Arzachena’s territory, which has an archaeological heritage of extraordinary importance, dating back to 3500 BC. The necropolis is formed by four funerary circles that touch each other; a fifth circle was modified during the Bronze Age into a gallery tomb. There are four cists made with stone slabs vertically stuck into the ground with a cover, surrounded by concentric circles of small stones delimiting the earth mounds. A set of small circular hills, touching each other. The funeral monument of Li Muri suggests that it was destined for a high social class, confirmed by the rich funerary equipment made up of various chlorite ornaments, large quantities of beads for necklaces, spheroid knobs in green soapstone, hatchets in polished stone, blades of flint. Among the funeral gifts, a bowl was found, also in chlorite, of singular workmanship.

The remains of a menhir found in the outermost circle of each tomb, is, as mentioned, a stone with a sacred value. Three small stone boxes, close to the contact points of the funerary circles, probably collected offerings for the dead, but they were found completely empty. The fifth tomb, modified in the Bronze Age into a gallery tomb, has a prolonged shape and the stone circles are in fact semicircles open in front. It became multiple burials where the stone caisson, the cist, took the form of a collective megalithic tomb, with a covered corridor (or allée couverte).

“The closing circle, the antithesis of the straight line. The eternal return.” (cit.)

In the photo: the site of Li Muri (photo taken from the web)