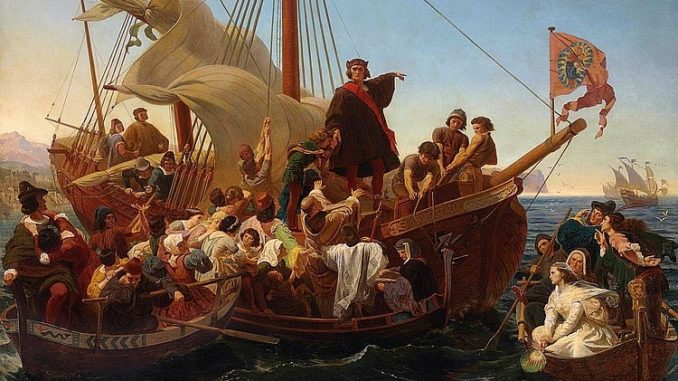 I remember that Sister Anna Concetta, my elementary school teacher, always reminded us on October 12th of the discovery of America by Ligurian Christopher Columbus who, with his famous three caravels, named Niña, Pinta and Santa Maria, had touched the American soil in 1492, while in reality, he was looking for a west route to the Indies. Immediately after that, our teacher’s assignment always followed and we had to draw the three caravels, an assignment that I enjoyed very much.

Amused, today I wonder how I would explain to dear Sister Anna Concetta that what she had taught us about the birthplace of the navigator, perhaps, was not correct.

The theory of his birth in Genoa had won on various hypotheses, varying from Savona or Abissola Marina to Calvi in Corsica; from being a Catalan of Jewish descent to Portuguese of the district of Beja, up to the most imaginative suggesting that Christopher was actually the Polish Prince Segismundo Henriques, son of King Ladislaus III of Poland, who would have changed his name to Christopher Colon to protect his father's identity.

But the most beautiful theory, in my opinion, is the one telling that he was Sardinian, born in Sanluri (250 km south from the Gabbiano Azzurro Hotel & Suites).

Despite being a small village with a strategic position, Sanluri was much disputed and in 1409 a battle was fought between the Aragonese and the Giudicato of Arborea and was won by the Aragonese. Giovanni De Sena took part in it, and for the services provided, he was appointed Viscount of Sanluri.

It was in that castle of the Viscount De Sena (of Siena), not in 1451 but in 1436, that Cristoforo Colombo was probably born from a noble Sardinian-Genoese family, spending his youth among Sanluri, Oristano, Tortolì and Castelsardo to study science and boating.

The father had an important kinship with the noble families of Northern Italy, including the Piccolomini of Siena, and his mother, who was an Alagon, was linked to the nobility of Aragon, with ties of consanguinity with the judge Eleonora D’Arborea (read her story here). Christopher Columbus was actually called Christoval Còlon having shortened the surname Piccolomini in ‘Còlon’. Christoval, as said, seems to be trained during his youth in Sardinia among Sanluri in Oristano, from Tortoli to Castelsardo, which at the time was called Castelgenovese and was the headquarters of the Dorias, a castle that Eleonora resided as it was belonging to her husband Brancaleone Doria.

This beautiful and intriguing theory is given to us by the thesis of the Spanish researcher Marisa Azuara in the book "Christoval Colón más grande la legenda" (Christopher Colón, larger than the legend), released in November 2007. The researcher, to validate her statements with further documents and facts, made a long research journey in the archives of Seville, Massa-Carrara, Siena, and Sardinia (Cagliari, Sanluri, Oristano, Bosa, Castelsardo).

But her research does not end there. As Christopher had probably expressed to the rulers Ferdinand the Catholic and Isabella of Castile his desire that all gains derived from the new world should have been invested in the Crusades. And Marisa Azuara’s second book  "Christopher Columbus - the universal crusade", was written on this hypothesis.

In conclusion, a Christopher Columbus of noble origin, both Sardinian, Genoese and Spaniard who is awarding Sardinia as the protagonist of the Western countries history.

“You can never cross the ocean unless you have the courage to lose sight of the shore.” - (Christopher Columbus)