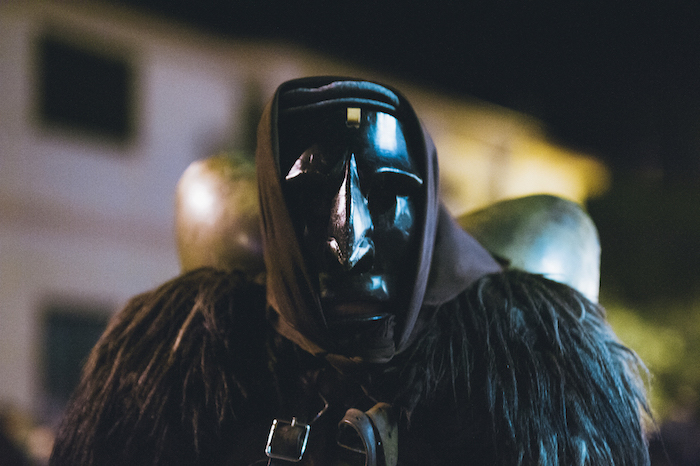 Here is the Boogie Man!

And doesn’t he have a plan

He sneaks into your window

He watches you when you’re sleeping

Around the corner he is creeping

You see a shadow on the wall

And think that you imagined it all

It was the lullaby that grannies sang. And I was really afraid of the black man. Being an imaginative child, in my mind's eye he was already lurking in the bedroom, hidden under my bed or in the wardrobe. He was closely related to the Italian Babau, "if you don't stop it, I'll call the Babau!". I found him later in the English boarding school, at the age of ten, where he had become the Boogey Man.

Now, at an age when I could be a granny myself, I find him in Sardinia. We are at Gabbiano Azzurro Hotel & Suites, drinking an aperitif on the terrace, when I hear a mother saying to her child: "If you don’t behave, I’ll call Mommotti!". I then discover that here the Babau, the black man who takes away children who do not behave well, is called Mommotti.

How is this scarecrow of mischievous and disobedient children represented? He is a big man dressed in black, with a thick black beard, with a hooded cloak, he has a gnarled club in his hand and a sack on his shoulder where he will place the child caught while doing wrong. Going from house to house, paying attention if a child doesn't want to go to bed... he approaches the windows and listens, ready to sniff out the slightest sign of whim.

The source of the name could originate from Mamuthones, one of the scary black masks of the island of Sardinia and whose tradition is lost in the mists of time. But the origin of Mommotti could instead derive from the territorial wars when the entire Campidano area was often attacked by fierce dark-skinned Arab pirates. The ones like Mohammed, famous for his cruelty, he raided coastal villages at night and often kidnapped children, causing anxiety in the entire population. Mommotti could be the distorted name of the ferocious Arab adventurer, Mohammed.

And doesn’t he have a plan

He sneaks into your window

He watches you when you’re sleeping

Around the corner he is creeping

You see a shadow on the wall

And think that you imagined it all

Photo: a Mammuthone - photo taken during a Mamuthones parade in Golfo Aranci