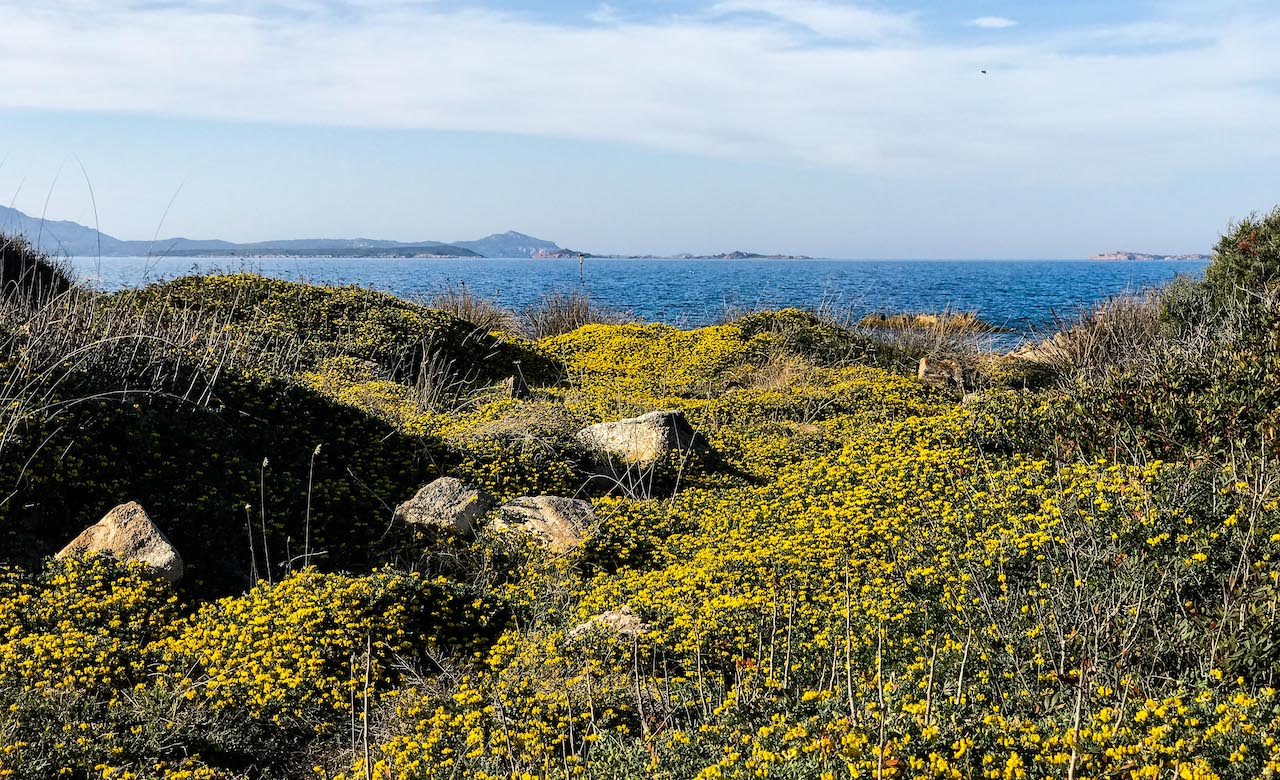 In spring, the Mediterranean Scrub marked by the golden spots of the gorse, is a delight for the eye. And if you stop the car, get out and head towards the golden yellow, the air brings you the delicate scent of this precious flowering shrub.

This is the gorse’s blooming time, a typical modest plant of the Mediterranean Scrub. It can reach one and a half meters with branches growing from its base. Widespread throughout Sardinia, it is a deciduous shrub, with very intricate, thorny and prickly branches rendering the vegetation impenetrable.

The flowers are gathered in intense yellow and very fragrant inflorescences, forming spots of great beauty when blossoming. Used as a garden ornamental plant because it is easy to cultivate, is also used to reforest bare areas.

From the stem is obtained a textile fibre and is used to produce ropes and garments. Due to its ability to grow on bare soils and as it prefers limestone and clayey ones, is widespread on difficult soils, both sandy and rocky. The gorse is also used to reinforce slopes and escarpments.

By making an excursion into the gorse's history, one might be positively amazed.

The fragrant gorse was already known by the ancient Greeks and Romans who cultivated it to attract bees and produce a delicately scented honey. They also used the bark, rich in tannins, to tan leather, but above all to use it as a fibre plant in the production of mats, ropes, and various artifacts.

The Greek botanist and philosopher Theophrastus (4th / 3rd century BC) and the Roman naturalist Plinius the Elder (1st century AD) are recalling gorse in ancient literature. Plinius believed that, due to the bright yellow colour of the flowers, the ashes of the gorse (Ulex europaeus), the Sarothamnus scoparius and the Spanish broom (Spartium junceum) contained gold.

While in medieval times in Europe, the gorse branches were used only to make brooms or sweepers, in the 12th century England provided them with nobility since Godfrey V of Anjou the Fair and his son King Henry II, used a twig of gorse in their heraldic symbol. It was due to that symbol, planta genistae, in Latin, or "yellow broom plant", that they were called "Plantagenets".

It also inspired, during the Middle Ages, St. Louis IX, King of France, to found the Ordre du genest for its symbolizing modesty and humility. Under the motto "Exaltat humiles", one hundred knights of the Order of the Broom served in the Royal Guard.

Its Sardinian name is "Tiria" but in Orani and Bitti it is called "scornaboe" due to the impenetrability of the scrub in which even the horns of an ox would be entangled. Due to its characteristic of settling in bare land it was also sung by Italian poet Leopardi: "And you, slow-growing gorse / who adorn this bare landscape / with fragrant thickets..." not so much emphasizing the solar aspect, as much highlighting its scent.

And more: "We are the gorse of yellow gold / scrolling down on the rocky trails /as large lit lamps." Sings the praises Grazia Deledda, superbly Sardinian.

William Shakespeare also, in "The Tempest", doesn’t disregard it: "Ah, I would give a thousand furlongs of sea for an acre of barren land, covered only with heather and gorse!"

Photo: the path of the gorse, in Golfo Aranci - photo credits Laura Mor