The Shardana: Warriors Of Sardinia 0 Commentaires 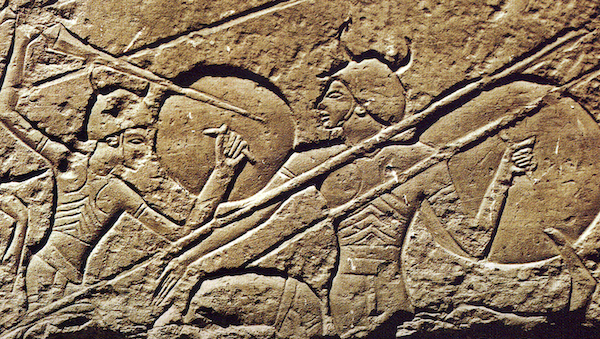 A Nuragic civilization was born and developed in Sardinia, confined in a period dating from the Bronze Age (1800 BC) to the 2nd century BC, already being Roman Age. The Shardana, populations from the western Mediterranean and belonging to the alliance of the Sea People during the 2nd millennium BC, would be identifiable with the Nuragic populations of Sardinia, although this is currently a controversial subject among scholars.

One of the reasons given by the pro-Sardinian-Nuragic-origin current is the extraordinary variety of votive and bronze statuettes (brunzìttu nuragicu in Sardinian) depicting warriors armed with daggers or Sardinian swords, arches and arrows, protected by two horned helmets and circular shields found in the archaeological sites of the Nuraghe, of the Tombs of the Giants and of the Sacred Wells of Sardinia. These wears are the same as the pirates and mercenaries in Egyptian monuments mentioned as "Shardana".

The Egyptian scholar, Abbas Mansour, Rector of Qena University in Egypt, states that, after careful studies, it is possible to affirm that the brave and fearful Shardana warriors chosen by Pharaoh Ramses II came from Nuragic Sardinia. Another thing relating the Shardana to Sardinia is the documents relating to the 18th Egyptian dynasty referred to Shardana: as the Egyptian language didn’t fully write the vowels, the word was written only with the ŠRDN consonants. To implement this theory there is also the great number of bronze votive ships among the archaeological findings, indicating how important was the sea ​​life with the Nuragic Sardinians, demonstrating that their civilization was experienced both in battle and in navigation, just as the Shardana were, which gives ground to their identification with the ancient Sardinians. Moreover, the Shardana traded in silver and lapis lazuli (or perhaps an azure mineral, the calamina), minerals of which Sardinia is rich.

But let's get to know this fascinating population better!

It was in the period of the Early Bronze Age (1800 bC – 1600 bC) that the Shardana arrived in Sardinia, the island known as the “miracles island” for its products, its woods, the salt flats and the red coral, its rich production of the spiny dye-murex to produce purple natural dye, and not least for his rich mines. The Phoenicians and Jews gave Sardinia the name of Cadossene, (Kadoš-Šēne = Hebrew-Phoenician for 'Holy Mother') for its reputation as a Miracles Island. The term was used until the eighteenth century in Sardinia, then fell into disuse except for some areas of the interior.

The Shardana began to spread in the Middle Bronze Age (1600-1300 BC) and reached the peak of their civilization with the Late Bronze Age (1300-900 BC), arriving to occupy and control every part of the territory, from which they started to conquer other lands of the Mediterranean. It is at this stage that the development of their social, political and economic capacity takes place. At the end of the Late Bronze Age, a tsunami caused flooding along the whole southern coast submerging the Campidano area and all Nuraghi near the sea, transformed the south of the island into an immense pond, abandoned by the population, who headed to other lands as far as the land of the Egyptians, to Greece, and, perhaps, returning to Mesopotamia from where the Shardana came.

The Shardana society was organized by different groups occupying different areas of territory but keeping in close contact. A community organized in clans, with a leader, in villages composed of circular huts with a thatched roof, very similar to today's Barbagia area pinnettas. Probably the leader was initially elected and afterward power became hereditary. Starting from the prehistoric villages, they began to build the sanctuary villages around a sacred well, then the fortified villages with walls of the megalithic type indicating the need to protect themselves from enemy invasions.

In many bronze statuettes, the characters raise their hands, perhaps as a sign of greeting or prayer. It is very likely that it was the Shardanas who introduced the worship of water in Sardinia, and perhaps also the solar and lunar rituals and the observation of the Solstices. For this cult, sacred wells were built in correspondence with the sacred wells and the well temples.

The Shardana economy was based on agriculture, breeding and fishing, but also on metalworking. Breeders, but also skilled in the bronze processing of which they had perhaps a monopoly in the Mediterranean. Eventually, they became military and great navigators people. All of this results from the founding of bronze statuettes which highlight their skills in arts and crafts. Ceramics from the Shardana period are also found on the islands of Sicily and Crete and on the coasts of the Italian peninsula and Spain thanks to their trade in the Mediterranean. They exploited the mines and produced weapons, tools and objects of common use in bronze that, known and appreciated in the Mediterranean, allowed a prosperous trade in the whole area. But bronze is an alloy consisting of copper and tin, and while copper abounded in Sardinia, where did the Shardana take the tin from? The assumptions are many. From the nearest Perdu Cara, near Flumini Maggiore, in the southwest of the island, to the most daring hypothesis: Nigeria? Zimbabwe? The Zimbabwe hypothesis, achieved by circumnavigating Africa, remains among the most fascinating. In Zimbabwe, in fact, near the area of ​​the mines exist large stone bastions whose walls and truncated-cone towers are similar to the Nuraghe. These fortifications of uncertain origin were called Zimbabwe, which means large stone houses in the local Shona language. After independence, the nation chose the name Zimbabwe abandoning the name Rhodesia attributed by the English occupation. This would also confirm how the Shardana were great navigators. In the bronzes of the ships, in fact, the prows are adorned with antelopes and gorillas, which at the time were not known in the Mediterranean area.