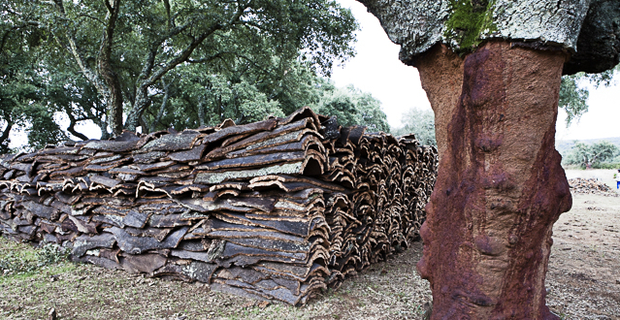 On both sides of the road, oak woods follow one another and the nude tree trunks are brick red where they have been already harvested. We are going to Tempio Pausania, the capital of Gallura, an hour's drive from the Gabbiano Azzurro Hotel & Suites, 63 km far, which is the most important center of both Sardinia and Italy for the production, processing and marketing of cork. The cork has fascinated man ever since: some studies date the origin of the cork-oak roughly 60 million years ago and it survived the Ice Age 25 million years ago thanks to the thermal protection of its bark. Archaeologists have found evidence that in 1300 BC. the Egyptians used cork to make household utensils, floaters for fishing, and closures of containers. That in the V century BC the Greeks plugged amphorae with corks. That in the IV century BC the Romans used cork to insulate the roofs, to plug containers and for footwear insoles. And that also in France several amphorae dated III century BC were discovered and the wine kept inside them was still in good condition. Later in the XV and XVI centuries in Portugal, the first documents regulating both the utilization and the commercialization of cork were found. Cork was also used for the caravels that in the past were discovering the unknown world. In Italy, the first ones to widely use cork were the Sardinians: they protected their utensils from the humidity, they realized stools and benches and various containers for everyday’s use. Today the cork-oak in Sardinia is present on an area of ​​90 thousand hectares.

Legend has it that the Benedictine monk Don Pierre Pérignon, after discovering the way to make sparkling wine, was the first one in the north of France, during the seventeenth century, to use cork stoppers to close bottles of wine made in the Champagne region and the perfect preservation made those wines precious. From this moment onwards, the development of cork industry started in both Europe and the United States. In our century, cork has been used in the automotive industry, in the latest generations of transport, aeronautics and aerospace. But what is cork? It is the outer bark, called secondary, covering the trunk of the Quercus Suber tree, typical of the Mediterranean.

Cultivating it requires knowledge and attention not to harvest trees below 10 years of age, not to risk their deterioration. Cork harvesting doesn’t harm the tree, as only the bark is removed, while a new layer of cork will regrow, making it a renewable resource. From the male cork, a less valuable quality is obtained, while the female tree’s cork is of greater commercial quality. Harvesting operation is repeated after another 10 years and the life of the oak grove can be up to over a  hundred years. The cork oaks, manage to survive the fires thanks to their insulating bark that saves the tree soul.

On our way back from the tour I know that from now on I will look with special respect any cork stopper that I will be holding in my hands.

“The soft extractive note of an aged cork being withdrawn has the true sound of a man opening his heart.” (William S Benwell)