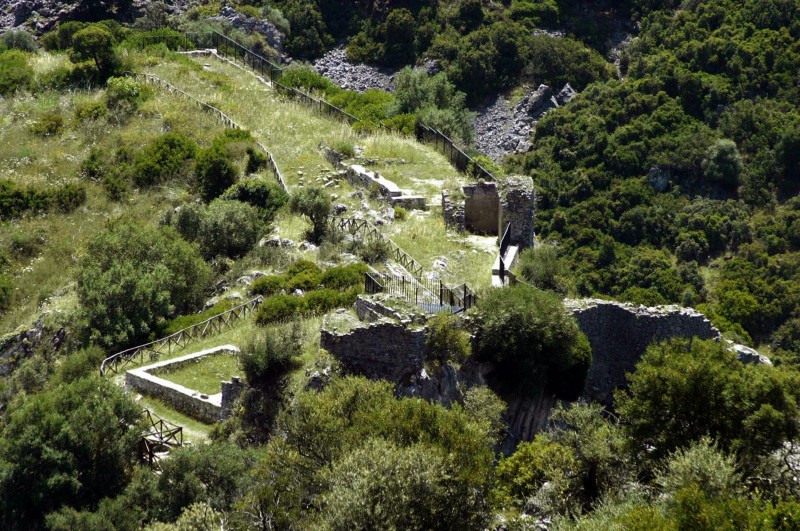 At 194 km and 2 hours and 20 minutes drive from Gabbiano Azzurro Hotel & Suites, you may find Samugheo, a small town in Oristano province. It seems a magical place, suitable for being the theatre of myths and legends as in fact Samugheo is. Stories of legendary characters and magical and gloomy creatures give the territory mystery and charm.

Among lonely and wild mountains with gorges, cliffs and imposing rocky walls, but rich in fresh springs that allow it fertility and prosperity, it has oak woods, olive groves, vineyards and large expanses left to pasture. The territory is covered by thick and rich vegetation allowing numerous caves to blend in with the environment, where wild boars, foxes, hares and rabbits happily live.

To increase the magic of the area are the “Janas" of Sardinia, scattered around there, which testify that the area was populated since the Neolithic. The area was subsequently occupied firstly by the Punics and then by the Romans. The Medusa Castle, on the other hand, dates back to the Byzantine era, at about eight kilometres from the town, inhabited until the 14th century, whose history is shrouded in legend hypothesising it would still host the ghost of the fantastic queen Medusa. There are various theories on the history of this queen with a mythological name.

One tells she was the daughter of Thorco, (or Forco), who left with his knights to reconquer the Holy Sepulchre and died defending it. His wife died of mad sorrow, and it was Medusa's turn to inherit her father's duties and honours by reigning over Sardinia for 28 years. A woman of great beauty, the most beautiful on the island and endowed with bewitching powers together with a singular strength proven during long hunting trips. She fell in love with a pilgrim prince who, to her great grief, left for the war. In greeting him, Medusa gave him a carnation that the young man kept in his heart until he perished in battle. Since then, the valley was filled with wild carnations, which can still be seen today,  to remember their love story.

Today the Castle is a ruin covered with vegetation and still inspires a series of legends about characters and magical creatures that inhabit it, giving mystery and charm to the Samughese territory.

Let's arm ourselves with courage and meet the mythical bad characters:

While, on the other hand, there is another good heroine with a sad love destiny like Medusa. It is Maria Cantada, a "Jana" who wove gold threads on the loom and made her sweet voice reach up to Samugheo where her lover king was staying. The king reached her in Pappu de Lei, 3 km from the castle with a horse shod upside down to deceive any pursuers. But their love ended because the king had to flee from his enemies, and Maria Cantada still continues to sing, protecting her king's treasure ...

To find the nicest sprites, you have to go to Logudoro, in the province of Sassari, where Sardinian Puny Goblins called Ammutandori may be found. They play jokes and pranks to men, but especially to beautiful girls of marriageable age. They are the Sardinian catty version of the Smurfs, (see Conca Fraicata - a Smurfs’ House?) they are curly, a couple of spans high and wear a red hat that they never abandon. According to the legend, whoever manages to get hold of one of these hats can then trade it for a small piñata full of gold….

“Aren’t you that mischievous and naughty spirit who goes around scaring the maidens in the village, and frustrating housewives by keeping their milk from turning into butter? Aren’t you the one who keeps beer from foaming up as it should, and causes people to get lost at night, while you laugh at them?” (William Shakespeare, A Midsummer Night's Dream)